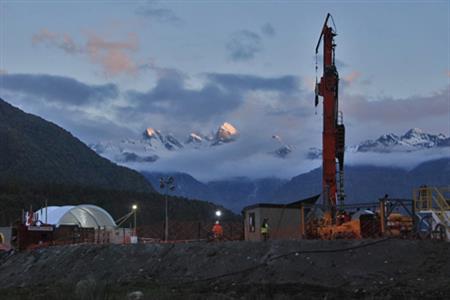 From October through to early 2015, scientists from all over the world gathered in Whataroa, near Franz Josef Glacier, in order to drill 1.3km into the fault and analyse the findings.

The SmartShelter was required to protect the sensitive equipment from the wild weather in the valley – and according to project manager Ray Marx, it held out “amazingly well”. “The first week we were here after it went up we had a really big wind storm come through – it actually moved four containers. And the shelter was up at that point and it’s still up.”

Project co-leader Rupert Sutherland was similarly impressed at the durability of the SmartShelter. “I must say that I was quite amazed that the shelter was able to withstand the local weather that we had. It was so windy that shipping containers were being moved by the wind, but the shelter did not buckle or rip.”

Due to its location in the narrow Whataroa Valley on the South Island, with high winds coming off the Southern Alps and storms rolling in from the sea, the site experiences “gale force winds coming up the valley every couple of weeks”.

Because of this challenging environment, the team chose Simple Shelter for its high wind and snow ratings and proven track record in withstanding the most rigorous conditions around. With the unpredictable weather in New Zealand, Smart Shelters is the expert in shelters that will protect your equipment, your worksite and your personnel from a harsh environment.

About the Author: dmm